Juicy shredded pork slow-cooked in its own fat in the oven. Just as easy as in the instant pot, and so much better! Layered with tortilla chips, tangy tomatillo salsa and a mountain of cheese. These carnitas nachos are a perfect crowd-pleasing appetizer, party food or weeknight meal that turns leftover carnitas or shredded pork into something special.

A dish originating in the Mexican state of Michoacán, carnitas or “little meats” are chunks of pork that have been fried slowly in their own fat. It’s a cooking technique that’s similar to the French confit. Traditionally, carnitas are made in giant copper pots or kettles called cazos. In Carnitas shops across Mexico you can find these giant pots standing in the middle of the room. They are often filled with a wide variety of the parts of the pig - pork shoulder, of course, but also parts of the pig that aren’t commonly used in North America, like trotters. Some parts are cooked till tender and succulent; others till they are crispy and browned. The same lard is used and reused, which, over time, results in exceptional flavor that can’t be perfectly duplicated at home, but can be approximated!

Traditional Mexican barbacoa is pit-barbecued meat. Usually lamb or goat is wrapped in some sort of leaves (banana or avocado) then lowered into an underground pit barbecue that’s lined with fire-heated rocks and then covered over with earth for the long cooking process. Most people in North America don’t have pit barbecues, so recipes adapted for North American home cooks usually swap out the goat for beef and call for outdoor (above-ground) barbecues or grills.

Unlike carnitas which are cooked in the liquid of the meat’s own fat, barbacoa is heated via the hot air generated by coals or gas or an open fire. It takes on a charred, smoky flavor that carnitas does not have, but dries out and burns more easily.

If you’re making the carnitas specifically for these nachos, you want to use a tougher, more marbled, cut of pork that’s well suited to low and slow cooking and being served pulled or shredded - like shoulder or butt. Boneless cuts are easiest, but you can also use bone-in cuts. You’ll just have to cut the meat away from the bones before seasoning it and tucking it into the baking dish.

Alternatively, these nachos are a fantastic option for stretching leftovers. Try making these nachos from leftover shredded pork the night after you’ve served carnitas or pulled pork sandwiches. Or, make a big batch of carnitas and freeze half for a future super-quick meal. Buying pulled pork or carnitas pre-cooked may also be a time-saving option, if it’s a product that’s available near you.

Of course, you can use any salsa you like for your nachos, but I suggest trying a tomatillo salsa, or salsa verde. Pork and tomatillos are a classic flavor pairing, and with good reason. Tomatillos have a tangy citrusy flavor that balances really well with the fatty richness of pork. Especially when paired with piles of shredded cheese, you’ll want some serious acid and heat to cut through the pork!

Homemade Tomatillo Salsa is so quick and easy to make and tastes way better than store-bought!

Any shreddable melting cheese will work for these nachos. I like to use either Monterey Jack or Pepper Jack cheese, or a 50/50 mix of cheddar and mozzarella. I find using all cheddar overpowers the other ingredients and makes the nachos overly rich - but I’ll use it if it’s all I have!

You can buy pre-shredded cheese if you are really pressed for time. Just be aware that pre-shredded cheese products use anti-caking additives designed to prevent the shreds from sticking together. They may serve that purpose, but they also prevent the cheese from melting smoothly - not ideal for nachos! I like to avoid all that by just shredding my own cheese from a block. Annoying, maybe, but worth it.

You’ll often see cotija cheese as a suggested ingredient in recipes that adapt Mexican food for North American home cooks, but it’s more of a crumbly cheese than a melty cheese. It wouldn’t work as the main cheese for these nachos - but you could use it as an additional topping to garnish the nachos with just before serving if you like really loaded nachos.

Use any large and thick restaurant-style variety of tortilla or corn chips. You want something sturdy and large, that will hold up under a pile of toppings without becoming soggy. I also like to look for lower sodium or no-salt added chips if I can find them. They may be a little bland on their own, but once you add the pork and cheese (and other toppings), your nachos will often be salty enough without a salted chip.

I’ve kept the ingredients for these carnitas nachos with salsa verde relatively simple, to let the flavors of the pork and tomatillos shine. The toppings are designed to complement the pork or cut through its richness - a bit of extra heat from thinly sliced Jalapenos (or serranos if you like it really hot), a bit of a fresh bite from the chopped white onions and a squeeze of lime for some bright citrus flavor.

You could do what I’ve done, or, go in the opposite direction and load up your nachos with whatever toppings you like and serve them with sides of guacamole and sour cream!

WHAT IS THE BEST METHOD FOR MAKING CARNITAS?

DON’T BRAISE YOUR PORK - CONFIT IT!

I’ve tried a lot of recipes for carnitas and so many of them, including instant pot and slow cooker recipes, call for simmering the pork in a braising liquid. When you braise meat, you are cooking it low and slow in a covered vessel using some water, but not enough to submerge the meat. I find this often results in somewhat dry shredded meat. Instead, this recipe mimics the traditional method of cooking in copper pots of lard. It’s a cooking technique very much like the French method of confit - cooking meat at a low temperature, in its own fat. It’s a sort of poaching, cooking meat in liquid at just below a simmer. Except the liquid used is fat, which does a better job of keeping the moisture inside the pork than water. It creates significantly more succulent and moist meat.

That’s why this recipe uses a confit method. Though it uses a small amount of vegetable oil, as the pork cooks its fat will slowly render and, in the end, the pork cooks mostly in its own fat. You want to use the smallest oven-safe dish you have that fits all of the ingredients and then crisp up your pork for a few minutes under the broiler before adding it to your nachos.

CAN YOU MAKE CARNITAS IN A SLOW COOKER OR INSTANT POT?

You can cook carnitas in an instant pot or slow cooker - but I don’t recommend it! When you make carnitas in a slow cooker or instant pot, what you are essentially doing is braising it in liquid inside a large vessel. But braising without losing moisture requires a snug fit between the meat and the sides and top of the cooking vessel. You might be able to achieve this on your stovetop, if you’ve got a small enough Dutch oven or pot, but instant pots are usually too large (unless you cook a TON of meat).

The good news is - making carnitas in the oven is JUST AS EASY as making it in a slow cooker or instant pot. Literally all you need to do is pack the pork ingredients tightly into a dish, cover it with foil and bake until the pork shreds apart easily with a fork - about 3 ½ hours. It’s the exact same process you would use with an instant pot or slow cooker with one big advantage - pork cooked using the oven/confit method will be much more tender and juicy.

You may want to use your instant pot or slow cooker anyway if you want to make carnitas on a really hot day and don’t want to turn on the oven at all, or if you want the pork to cook during the day while you’re not at home. Just know that the pork won’t turn out quite as moist and juicy as it would with a confit method.

HOW TO FREEZE CARNITAS

Pork carnitas is so easy to make and such a versatile ingredient. You might want to make a double batch, shred the meat, and freeze some for later for filling things like tacos or enchiladas or making pulled pork sandwiches.

To freeze, allow the meat to cool then portion it into small freezer safe containers or freezer bags. Add in some of the cooking juices from the baking dish to help the meat retain moisture, then (if using bags) press flat and close, squeezing out as much air as you can. Label with the contents, date and freeze. Pork carnitas will last in the freezer for up to 6 months.

For the Pork Carnitas: 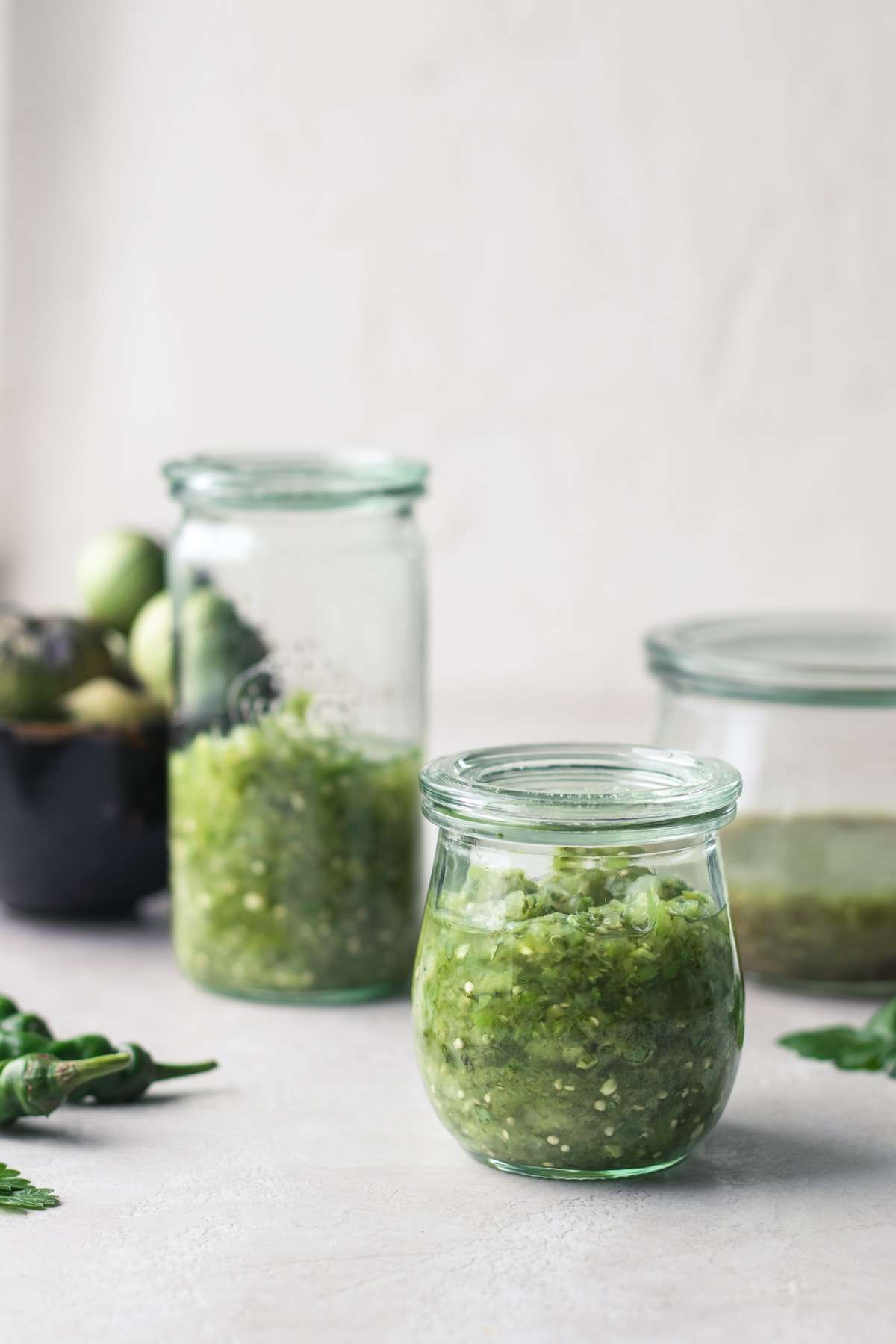